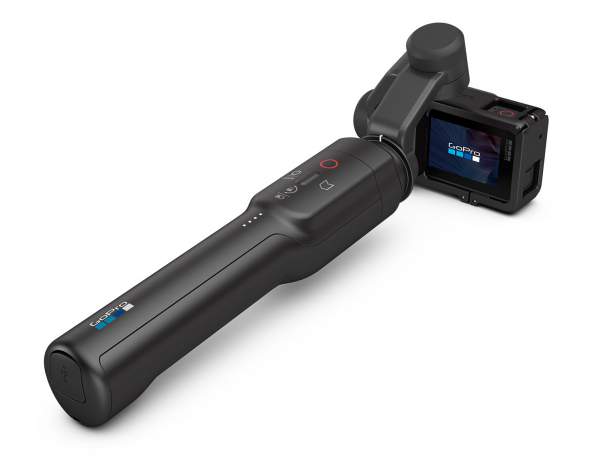 Unlike the more sculpted, ergonomic design of the Osmo Mobile, the Karma Grip looks a little basic, with a relatively simple ‘tube’ design. Its buttons are covered by a rubbery membrane, and it has no trigger or joystick like the Osmo. Plus, the battery isn’t removable like the Osmo’s and it has to be charged via Usb-C. The price doesn’t include a camera though, so if you don’t have a Hero 5 black, add another £349. That’s £639 in total. While this all sounds very negative, there is a whole lot to like about the Karma Grip. For a start, the built-in battery lasts for ages – we think GoPro’s claim of one hour, 45 minutes is conservative. Plus, the Karma’s battery can charge the Hero’s to keep it recording for longer. also, when you connect a Usb-C cable to the port on the bottom of the Grip, you can use it to transfer footage from the camera without removing it from the frame, and if attached to a charger, it will charge both batteries at the same time. Use a standard phone power adaptor and it will take six hours to recharge from empty, but just under two hours with GoPro’s supercharger. Naturally, the buttons on the Grip’s handle control the camera’s functions, so you can change modes, start and stop recording (or take a photo) and mark highlights, just as you can with the camera’s own buttons. 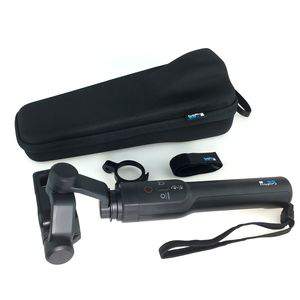 There’s one extra control, which lets you lock the tilt angle of the camera. If you don’t use this, the lens will always point dead ahead and remain vertical. In most cases, that’s exactly what you want, which means you don’t need to learn any controls or techniques to immediately get great, smooth footage out of the box. Just walk around and the Karma Grip does its stuff to take the wobble and jerkiness out. of course, the Hero 5 black now has electronic stabilization, so there’s an argument that you don’t really need a Karma Grip for them. and it is a bit annoying that the included frame (which GoPro calls a ‘harness’) is only compatible with the Hero 5 black: you have to buy a separate harness for a Hero 4.

What you do get in the box is a quick-release clamp that attaches to the top of the Grip below the gimbal and allows you to use almost any standard GoPro mount. This means it can be used hands-free and still provide stable footage when walking, cycling, hang gliding, or whatever it is you’re doing. To fit the clamp, you first have to unlock and remove the gimbal, slip on the clamp and then reassemble the Grip. If you buy the drone, the three-axis gimbal is shared between the drone and Grip handle, but there’s rarely any need to separate the halves if you just buy the Grip.

The Karma Grip is so intuitive that you can get smooth pans and smooth movement in a straight line without them. both systems offer very stable footage, but the Karma somehow manages to iron out the vertical movement from walking a little better than the Osmo. It isn’t gone completely, but you have to look for it to spot it.

The Karma Grip delivers silky smooth video when you’re moving around, is very easy to use and battery life is good. It’s a shame that it only supports the Hero 5 black out of the box, and there are no harnesses for session cameras or even the Hero 3 range. It’s better designed for capturing sports than the rival dJI Osmo Mobile, but the Osmo will work with any android or iPhone, so is arguably more future-proof.