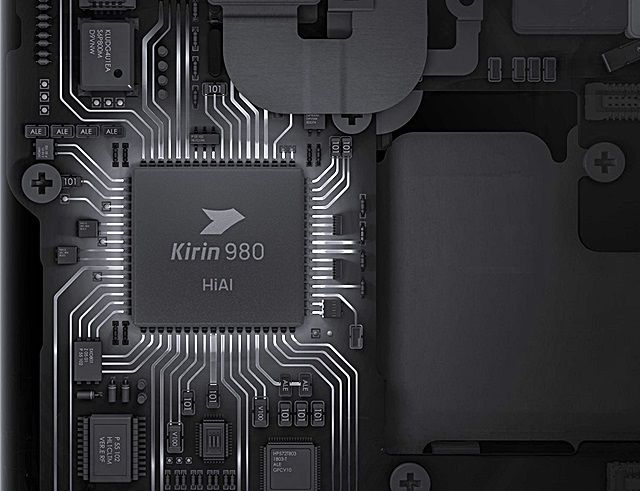 The IA Mobile is the watchword on which all smartphone manufacturers are obsessed. However, only a few are driving the road with new innovative developments, both on their chips and on their smartphones. Huawei, world leader in high-end smartphones, launched the Kirin 980 in August 2018, which was the first Mobile chipset AI at 7 NM in the world.
Manufactured with the TSMC 7Nm process, the Kirin 980 comes with a new CPU, GPU and Dual-NPU, which not only offer great performance, efficiency and connectivity, but together they represent the biggest leap forward of Huawei. All This helps to nourish the next generation of Huawei smartphones, satisfying the needs of the most demanding consumers.

Which means 7 Nm for the performance of the SoC and smartphone, the cutting-edge process technology of 7Nm allows Kirin 980 to pack 6.9 billion transistors within the size of an American cent silicon. Compared to the 10 Nm process, the 7 NM process delivers improved SoC performance by 20% and SoC energy efficiency by 40%, to 1.6 times the transistor’s density.

In Fact, the Kirin 980 offers 75% better CPU performance and 58 percent better CPU power efficiency than even the previous Kirin 970 chip1. The Kirin 980 features an OCTA-core CPU that consists of four Cortex-A76-based cores and four Cortex-A55 nuclei.
This means that the Kirin CPU subsystem designates large high-performance cores to manage immediate and intensive workload loads; Large cores with high efficiency to provide constant performance; and ultra-efficient cores to tackle light activities, bottom-up with extreme energy efficiency. Essentially, this means that users have a high power engine on their phone that improves both photography experiences and videography in particular. In Addition, the 980 Kirin allows faster application startup times, better multitasking, and generally smoother user experience.

Due To The natural evolution of social networks and constant connectivity, Smart Phone users each day have become more like content creators rather than simple photo-sharing and correspondence for personal use. For this reason, the next generation of AI processors such as the Kirin 980 are of paramount importance to increase advances in sophisticated high-end smartphones such as the HUAWEI Matte 20 series.

Best support for multi-camera configurations
Huawei has integrated its fourth generation image signal Processor (ISP) patented by Kirin 980. In Addition to a 46 percent increase in pixel performance compared to its predecessor, the new ISP also provides better support for multicamera configurations, such as the Leica triple camera in the HUAWEI Mate 20 series as well as a new HDR Technology of Color reproduction that can manipulate the contrast of the image to highlight objects in various parts of an image.

The Kirin 980 also uses the multi-pass noise reduction solution that accurately removes artifacts without deleting image details, resulting in better quality of images taken in low-light scenarios. This rewards the user of smart phones with sharper photos and more professional videos, contributing to a better mobile technology experience in general.

Another new feature of the ISP is improved Motion Tracking. When a user tries to take a picture of a moving person, the ISP can still recognize the problem with the accuracy of 97.4 percent, so any user can easily capture fleeting moments.
The increased demand for users for the latest and best video capture capabilities of smartphones was also taken into account with the innovations included in the Kirin 980. The Chip adopts a new pipeline dedicated to processing video capture, allowing the camera module to shoot video with a 33 percent shorter delay.

Connectivity faster connectivity is critical to an experience of photography and higher videography, especially since once sophisticated users of today create their visual content, they want to load immediately on social networks or Share another way with family and friends using their smartphones.

To provide the best connectivity, Huawei has integrated the first LTE modem compatible with the world’s cat. 21 with a maximum discharge rate of 1.4 Gbps to the Kirin 980. In Addition, the Kirin 980 supports the aggregation of vectors, including through frequency bands. This is just another reason why the Kirin 980 is ideal for pushing the envelope in terms of photography and videography, or any kind of work that involves a large data transfer.

In short, the Kirin 980 and the AI that allows you to do for a smartphone that takes photography and videography exactly where users of smartphones today want to go. They No longer want to simply share the basic images with family and friends; Now They are sophisticated content creators and the HUAWEI Matte 20 series is an important tool. The Kirin 980 delivers the best performance, energy efficiency, support for multi-camera configurations, improved Motion Tracking, superior connectivity, and much, much more, to give the new generation of smart phone content creators just what they want. photo: Huawei