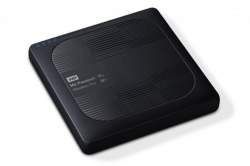 As for as packaging goes, the My Passport Wireless Pro doesn’t come with much. Besides the drive, there is also an adapter, a proprietary USB 3.0 cable and the user guide. The Wireless Pro itself has a simple design, looking like a square-shaped black box. On the top, we found a couple of blue LED indicators. Four of them are displays for remaining battery life, while another, while another two closer to the centre light up whenever there are disk or wireless activity. At the back is a proprietary jack to looks like an expanded microUSB port and a standard USB port next to it, as well as a button to switch it on for use via battery and another to check the remaining battery life. Finally, a SD card slot can be found on the left side. The Wireless Pro has multiple uses, either plugged to a PC or external devices like cameras with cables, or used wirelessly via the WD My Cloud software and mobile app. With the SD card slot, users can also directly backup or transfer files from a SD card to the drive. Besides the My Cloud software, it can also be used turned into a Plex Media Server. Thanks to the 802.11ac WiFi’s speed, it’s possible to stream to two devices at the same time. 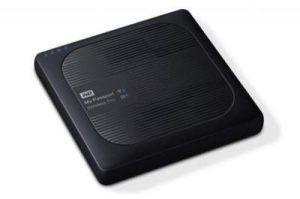 Inside is a 6,400 mAh battery, which makes it possible to be used wirelessly. Although variable and easily lowered by simultaneous video playbacks, the battery can easily last even professional content creators for most of a work day. It also helps that the adapter can charge it from 0 to 100% in about 3.5 hours.

Direct cable transfer to PCs are as fast as expected; initially files transfer around 40 MB/s, it ramps up after 30 seconds to about 100 MB/s if a USB 3.0 port is used. It would have been great if the drive inside is an SSD, but traditional drives are still required for larger capacities. In wireless mode, the wireless bands used are 2.4GHz and 5GHz. Transfer speeds can go up to as high as 115 MB/s download speed and upload speed of 5MB/s, depending on the location of the drive and relative distance.

An able performer that suits those who need to transfer files quickly, such as photographers out on a shoot. It’s ability to use 5GHz band wireless also eliminates the need for cables, yet can deliver the speeds that large files require.