The new Nokia 5 has a 5.2in IPS HD display within a neat, compact body (149.7×72.5×8.05mm) that’s smooth, sleek and comfortable to hold thanks to rounded edges. It’s made from a single block of 6000 series aluminium for a premium finish, and
uses Gorilla Glass to add durability to the display.The Nokia 5 will be available in Matte Black,Silver, Tempered Blue or Copper. We particularly like the blue option, but think that all four colours look gorgeous.

We’ve already mentioned the 5.2in display, which looks gorgeous with tiny bezels and seems to blend right into the chassis. Its downfall though is that its display’s resolution isn’t as high as we’d have liked at 1280×720 HD. It was still vivid
and bright, but when compared with the likes of the Moto G5’s Full HD offering on a phone with the same price tag it’s a bit of a shame that the Nokia 5 misses out.
Inside the phone is a Qualcomm Snapdragon 430 processor, which is the same one you’ll find inside the Nokia 6 as well as the Moto G5. That’s paired with Adreno 505 graphics and 2GB RAM.We’ll have to hold of on our final verdict about the Nokia 5’s performance until we’ve put it through its paces in our benchmark tests, but we expect it to cope with launching apps and switching between apps perfectly well, while struggling a bit with more heavy-duty multitasking or gaming.
There’s 16GB internal memory with support for up to 128GB extra via microSD.
When it comes to cameras, the Nokia 5 has a 13Mp camera on the rear with a dual tone flash,while the front-facing camera offers 8Mp for selfies.There’s a non-removable 3000mAh battery that charges via Micro-USB and you’ll also
find Bluetooth 4.1, NFC, LTE 4G, among its connectivity specifications. 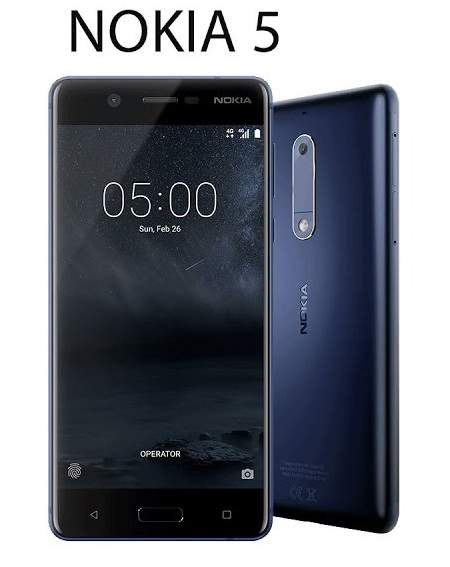 Software
All three of the new Nokia Android phones ship with Android Nougat 7.1.1 and HMD Global has We’re impressed by the Nokia 5, particularly when considering the price tag. It’s good-looking with decent specs and we love addition of
Android without over complicating it with any sort of overlay. We expect that it could become a really popular choice for anyone in the market for a mid-range phone, and a strong contender for the Moto G5.
Specifications:
5.2in (1280×720, 282ppi) IPS touchscreen
Android 7.1.1 Nougat
1.4GHz Qualcomm Snapdragon 430 CPU
Adreno GPU
2GB RAM
16GB storage
MicroSD up to 256GB
13Mp main camera, dual-LED fl ash
8Mp front camera
Bluetooth 4.1 4G LTE
GPS
NFC
Fingerprint scanner
FM radio
3000mAh non-removable battery
149.7×72.5×8.05mm