ORAL-B’S BEEN TOOLING AROUND with this “smart-toothbrush” concept for a couple of years now, with many of its models now offering built-in Bluetooth and the ability to connect to an app to track brushing statistics, as well as how often you floss, brush your tongue and/or rinse with mouthwash. The Genius 9000 is the latest flagship in this smart range, although in terms of actually ‘new’ features, it’s not particularly ambitious.

It offers the same six brushing modes (which change the speed and oscillations of the head to focus on specific cleaning techniques) alongside the Android and iOS app that times your brush sessions and, while it does so, displays weather, news headlines and calendar appointments, presumably to keep you entertained for the two minutes it takes to clean your teeth.

The headline new feature is ‘position detection’ (something that’s proudly touted on the front of the box), but this is actually mostly enabled by software — to use it, you need to stick an included bulky plastic phone-holder onto your bathroom mirror at head height (a bit like a car windscreen mount, just with the added excitement of potentially dropping your phone in the sink) and then insert your phone, with the device’s camera pointed at your face while you brush. Oh, and you have to confirm your camera’s positioned correctly every time you use Position Detection — and refrain from moving your head too much while you do so.  In testing, moreover, the app’s ability to actually detect brush position wasn’t great. At best, it was a little bit laggy to recognise when we’d moved the brush — particularly when we were brushing the front area — which often led to us having to brush for prolonged periods until the app actually decided we were done. 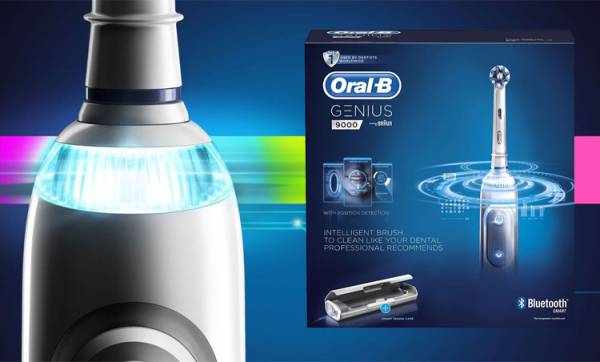 There’s seemingly a good reason the designers haven’t made this the default mode, then — most people will find it just too inconvenient to be useful. Moreover, it’s arguably not a huge improvement over the regular brushing timer, which can be paired with a visual aid to prompt you to brush four specific sections for a proscribed time period. What’s actually more useful in this Genius 9000 pack is that the included carry case, which has its own secondary-battery and doubles as a charger, so it’ll re-juice your brush while it’s packed away. That adds to the weight, but if you’re going on a prolonged trip, it’ll save you from having to take a charger (although that’s admittedly quite compact).  The shortcomings we’ve highlighted  don’t make this a bad electric toothbrush — it’s just not a particularly smart or insightful one. You’ll need to be a brushing obsessive to bother sticking with certain features, but either way, it still gives a nicely refreshing clean.