As the most powerful receiver with three-digit mark in RX-V series,Yamaha RX-V781 delivers a power of 95 watts into seven channels, support for Immersive Sound formats and all other options that might need them more demanding users.

Design and development
At first glance, Yamaha RX-V781 is difficult to distinguish from other models in the series. The design of the front panel, which is horizontally divided into two parts, and with a slightly protruding bottom part, it is known from other models. However, more detailed examination reveals that the front panel, unlike the weaker model, made of brushed aluminum, which contributes to sustainability, and overall impression of quality. At the corners of the lower part are located two large circular controls, which are used for input selection and volume control, while between them are four SCENE buttons, four smaller buttons to control the sound settings, frontal USB-A and HDMI port, 6.35-mm headphone output connector and the calibration mic. The upper part of the front panel is fully covered with acrylic in the center of which shall be borne by the dot-matrix display with white illumination, which can not be seen when the device is turned off. Below it is placed a set of 10 small buttons for controlling the radio receiver and select the zone, while on the right part of the command Pure Direct, a key to the left of the stand. 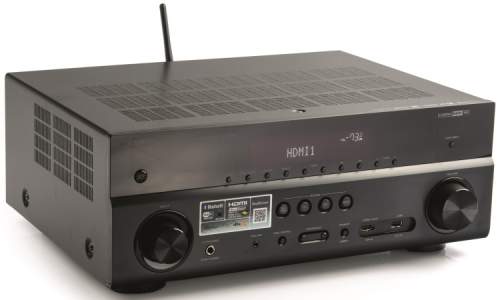 As the dominant kind of connection audio-video devices, HDMI connections received five inputs and two outputs, and there are still two component and composite video inputs, and one monitor output of the same type. For digital audio connection are provided by two coaxial and optical inputs, line RCA inputs has four, a complete list of connection with the accompanying turntable grounding screw. To connect to a local area network Ethernet port are provided, and wi-fi with the antenna at the rear, and RX-V781 is equipped with modules for bluetooth and AirPlay connection. In addition, the differences versus lower models are visible in the presence of pre-out outputs for connecting additional power amplifiers and speaker terminals for the second zone or extra presence speakers, which are the same as the main terminals.

This AV receiver completely supports with latest HDMI® standards. Thanks to transmission of 4K video at 60 frames per second pass-through, you can fully enjoy the high definition video quality of 4K without degradation. It also adheres to the HDCP2.2 copyright protection standard for 4K video transmission. It also supports HDR (High Dynamic Range) Video including Dolby Vision and Hybrid Log-Gamma which provides incredible contrast, smooth tone and rich, bright colours. Furthermore it supports the wider colour gamut of BT.2020 pass-through. This AV receiver is also compatible with 3D, Audio Return Channel and CEC for easy operation.

The manufacturer states that the D / A conversion used Burr-Brown chips on all channels, what we realized when we peered into the interior of the receiver. Power circuits are labeled PCM5102A, complemented by a digital signal transceiver from the same company, with the tag PCM9211. In addition, on the upper circuit board, we noticed a couple of Texas Instruments Cinema DSP circuits for audio processing in the digital domain, the Silicon Image HDMI transceiver Sil9589CTUC, the main controller Altera Cyclone IV and three memory modules Winbond W9825G6KH a total capacity of 768 megabytes. On the bottom panel, we came across a pair of electrolytic capacitors per 8,200 microfarads, and the front of the cross is a large cooler with seven pairs of complementary output transistors Sanken A1695 and C4468. Finally, on the left side of the power supply section, with medium-sized EI transformer.
Sound and features
Like other major manufacturers, Yamaha has long been established standards in terms of supporting equipment devices, and the Yamaha RX-V781 comes with multilingual quick guide in printed form, a complete user’s manual on CD, ambient FM and AM antennas and microphone for automatic calibration system . The remote control is marked as RAV537 and a slightly improved version remote control that runs through the whole series, and is characterized by large dimensions, solid build quality and well-labeled buttons.

The list of additional features of the test receiver deserves a separate article, but we will try to finish the work that briefly mention the most important. Yamaha for all network devices of new generation capacity for MusicCast expires, or the possibility that the receiver is connected multi-room sound reinforcement system for the whole house. Apart from the aforementioned support and 192/24 DSD files, RX-V781 accepts Dolby Atmos and DTS: X, as well as all popular surround formats. To improve the sound MP3 files ensures Compressed Music Enhancer, which is especially useful when playing with the phone via bluetooth connection, and optimum image quality is provided support for 4K Ultra HD with 60 frames per second, HDCP2.2, HDR and BT.2020. In addition to the remote control, control can be used free application that allows detailed settings of the system. On the other hand, for those who do not want to give up their vinyl collection is present phono input for MM cartridge type, and outputs for additional amplifiers on all channels enabling the RX-V781 easy to transform the AV preamp-processor and become the center of a very powerful system, whose strength will depend not only on the wishes and possibilities of its owner. So, no matter what her role entrust the audio-video system, the Yamaha RX-V781 offers a solution and impose itself as a truly versatile devices and a hi-fi investments.