The Olympus OM-D E-M10 IV is a compact and beautiful camera, just like its predecessors. Its SLR-style body and numerous dials may seem imposing to some beginners, but Olympus has striven to make it easy to use for those who want to avoid those controls.Changes to the front grip can be subtle, but it’s safer and keeps your hand positioned higher on the camera for added stability. The thumb grip is substantial and is positioned to avoid accidentally pressing the buttons.
While the back of the camera has a conventional control design, the top plate is loaded, perhaps over-loaded. It has two control dials (good news for fans), a dial in mode and three small buttons, two of which can be customized.
The Olympus OM-D E-M10 Mark IV is the entry-level model of the Micro Four Thirds line of DSLR-style cameras (PEN models, such as the E-PL10, are rangefinder style). It’s a step up from the beginner-focused E-PL series, which offers more controls, better build quality, and a wider feature set. It sports a 20MP four-thirds sensor, body image stabilization, foldable touchscreen with a simple interface, and 4K video capture.

A useful addition is USB charging, something that has been absent from low-end Olympus cameras for too long. It takes hours to fully charge the battery, but being able to recharge on the road is a must these days. We would like Olympus to still include an external charger, which is now a $60 option.The camera does not support the USB PD standard, so it cannot be charged with high-power chargers.
Under a plastic port at the bottom of the camera you will find the battery compartment and memory card of the E-M10 IV. The memory card slot is compatible with high-speed UHS-II cards, a pleasant surprise for a camera in this price range, and you can understand how quickly it clears its buffer.
The OM-D E-M10 IV uses the venerable BLS-50 lithium-ion battery. The CIPA estimate for battery life is 360 shots per charge using the LCD screen (numbers with the viewfinder are not published), which is above average. In most situations, you will be able to take more photos than advertised, although frequent use of Wi-Fi can cause the opposite.

With its body stabilizer, the Olympus OM-D E-M10 Mark IV is a solid choice for those looking for high-quality 4K video images and easy-to-capture capture. The feature set isn’t the most robust (nor would we expect it to be), but off-camera images that use the “Natural” profile are generally really nice. We’d love to see the microphone and headphone jacks because they’re sadly absent. 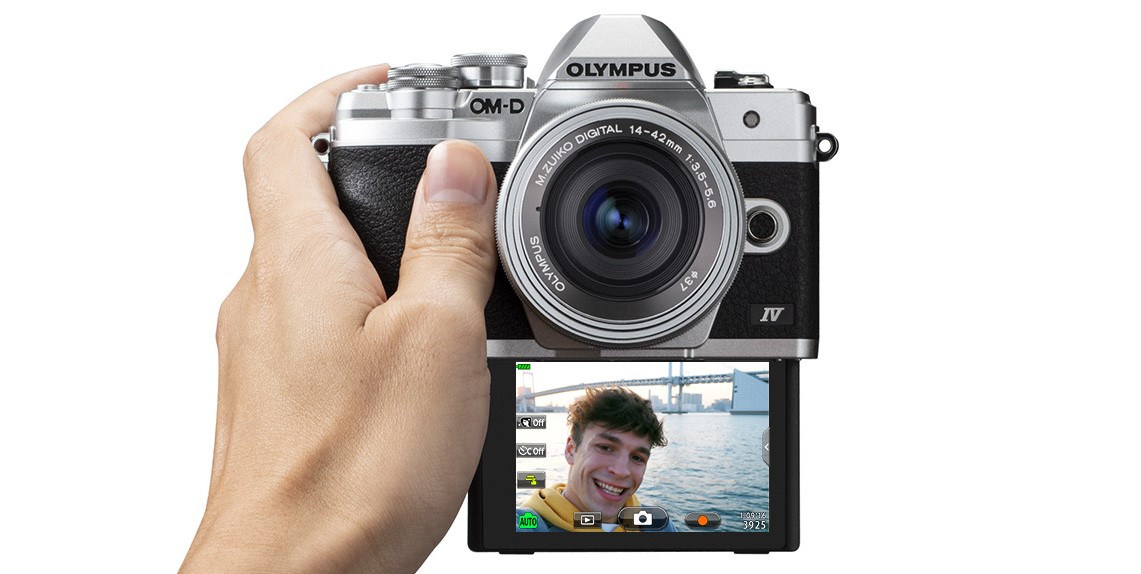 In terms of video image quality, the Olympus OM-D E-M10 Mark IV camera works quite decently in its 4K mode of 30 frames per second. There are a lot of fine details recorded, the color is good, and both the sliding shutter and the fake color artifacts, although present, are quite minimal.
One of the main changes that Olympus highlighted in its announcement of the E-M10 IV was its improvements in autofocus, and especially in continuous AF monitoring. The company has also improved its face and eye detection algorithms, particularly when faces are detected from extreme angles.
The good news is that when this happened, releasing and then pressing the shutter button again would normally cause the focus to reopen fairly quickly and the tracking could continue once again, with maybe only a couple of frames lost. But there is no doubt that the continuous AF monitoring of the Olympus OM-D E-M10 Mark IV is still not up to par with the hybrid phase detection systems used by the competition.
The Olympus E-M10 IV has a lot: it is affordable, very compact and lightweight and combines very well with its equally compact and lightweight 14-42mm kit lens. And it offers quite good image quality overall, as well as taking a significant step forward from its predecessor in terms of detail collection capabilities and high ISO noise levels.
Some more experienced photographers, however, will find it a bit limiting both because of its lack of customization, and because of the way some features like exposure bracketing are hijacked in SEMI-GUIDED AP (Advanced Photo) mode, where they can’t be combined with features in non-AP mode like exposure in priority mode. But for your target customer, it offers a good breadth of functionality and plenty of room to grow, while offering enough hand-in-hand support to make even relatively complex features accessible. Video: Olympus/YouTube

Frequent sports shooters will probably want to look for the Olympus line or a rival brand, as we find that the autofocus tracking of the E-M10 IV remains something of a weak point. That said, its autofocus is likely to be up to the task of filming school sports and family activities, subjects that are probably more typical of Olympus’ lens family documentary filmmakers.
The Olympus OM-D E-M10 Mark IV is a beautiful entry-level camera with some useful aids for new users, but with enough controls to provide room to grow. While its autofocus and burst speeds are right around the competition, its distinctive feature is an effective stabilizer on the body, especially useful for low-light still images and portable video shooting. Overall, the E-M10 IV is a good photo companion for a variety of users. Photo: Olympus