It’s formatted with exFAT, so is out of the box ready for Mac, Windows and Android. Samsung include a pair of cables – one for USB 3.1, and another for Type C.The T5 itself has a single Type C port.

An aluminium case sheaths the T5,and Samsung assures us it will survive a drop from up to 2m. Being solid state,of course, that figure is extremely conservative. There’s no weatherproofing – this just isn’t the sort of product that typically needs such protection. If
weatherproofing is important to you there are many alternatives, such as Sandisk’s
Extreme 510(HIGH-PERFORMANCE, ALL-TERRAIN, WATER-RESISTANT PORTABLE SSD).

Samsung offers 256-bit encryption, supporting passwords up to 14 characters in length. The software that manages this is includes on the T5 for Windows and Mac, and from the
Play store or Samsung’s site for Android. It’s simple and professional looking,and activates when you connect the Samsung SSD T5. A nice big selector at the top of the login
screen lets you enable or disable the login function (though of course you’ll need to have logged in initially to turn it off, if it was at any point enabled). The software also has a function for checking for firmware updates, and managing installation. It can be set to auto or user prompted. Just like your desktop SSD management software. 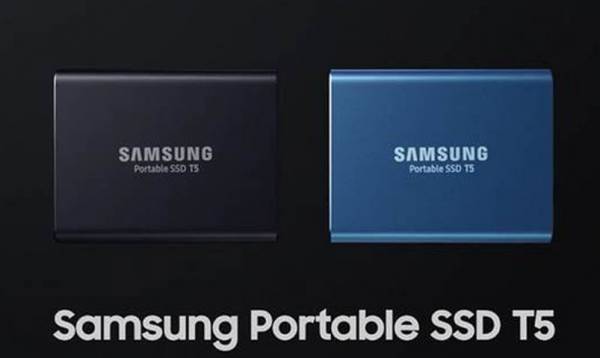 The T5 benched at 364MB/s read, and 371MB/s write on a Skylake i5 @ 3.3GHz using CrystalDiskMark through a USB 3.1 connector. On a higher spec CPU it can achieve a theoretical maximum of 540MB/s. We tested the T5 on a Skylake i7 6700K @ 4.6GHz and achieved 552.4MB/s read, and 498.7MB/s write through Type C – which faster than
Samsung’s own claimed speeds.Thus, it is clear that the new T5 is truly at home with a fast CPU. For anything less than a fast i7 its true potential won’t be realized, but let’s remember that this device’s purpose is portability, so in its travels it may well find itself attached to all manner of PCs and devices, now and into the future, so from that perspective
it’s a good purchase so you just know it will be ready for extremely fast transfers
no matter what it’s attached to.
With the T5 Samsung has hit peak performance for a SATA portable SSD. We suppose the next generation will use the NVMe protocol, or perhaps a new super premium category for NVMe will be introduced in Samsung’s portable SSD space, alongside SATA. It’s also possible we may see a portable SSD using RAID 0 onboard to boost speeds. We’ve seen
that already with portable hard drives,such as the WD My Passport Pro, and some esoteric portable SSD brands and products like the Glyph Atom. But for now the T5 is a fast as a SATA portable SSD can get, and it comes from the mighty Samsung and with that some peace of mind regarding reliability and firmware update likelihood, backed by a 3 year
warranty.